THE CAPE FIRE AND BABOONS

Information provided by The City of Cape Town

The four baboon troops affected by the Cape fire that broke out on 1 March have returned to their normal routines says Julia Wood, Manger of Biodiversity Management for the City of Cape Town. 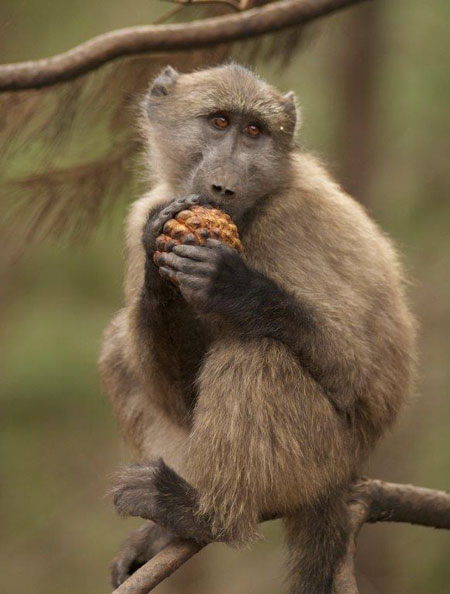 The troops in question are named the Tokai troop, Mountain troop, Constantia troop and the Zwaanswyk troop. The Cape fire engulfed three out of the four baboon troops’ territorial sleeping spots. The City of Cape Town’s Biodiversity Management staff were on the fire-line to assist with the fire fighting and to assist the rangers with the baboons. 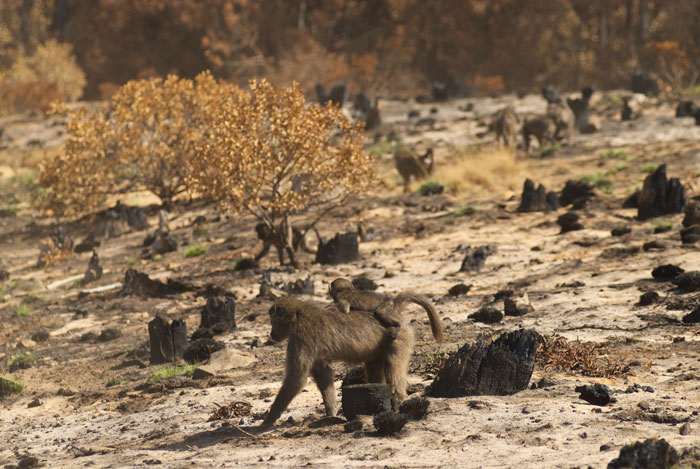 The baboons in the Cape peninsula are naturally adapted to fire. However the troops affected by the Cape’s widespread fire tend to live in forests of dense pine plantations and mixed invasive trees which are extremely flammable. The 68 rangers employed to manage the baboons had their work cut out as the baboons felt safe high up in the trees and were reluctant to move despite the imminent danger. 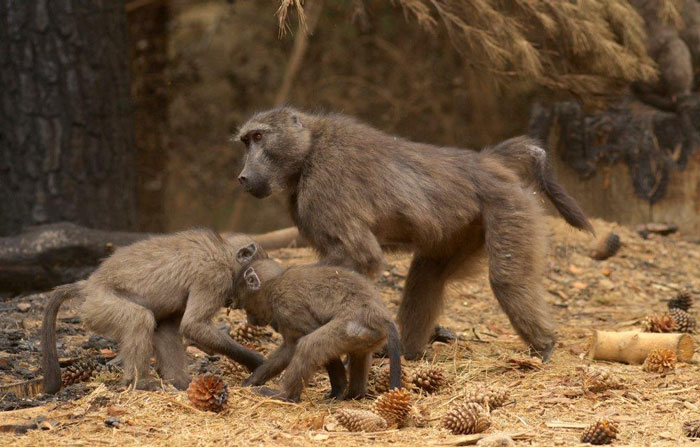 The Tokai troop sleeps in the large gum and pine trees located next to the Tokai Guest House. Rangers tried to get the baboons to move away from the flames, but to no avail. When the wind picked at 2:30am they were trapped in the trees and moved further up the canopy. The baboons were surrounded by the flames and there were some causalities, especially amongst the mothers and babies. 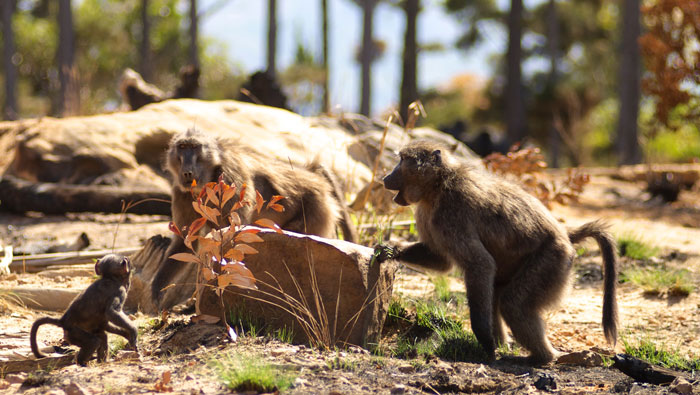 The Mountain troop was luckier as the rangers were able to move the baboons down the mountain before the flames reached their territorial sleeping spot. The troop was then kept ahead of the flames for the next two days. The older baboons were very inquisitive and had to constantly be chased away from the slow moving fire.  Fortunately the fire did not damage this troop’s usual sleeping spot but they were monitored closely by Human Wildlife Solutions. 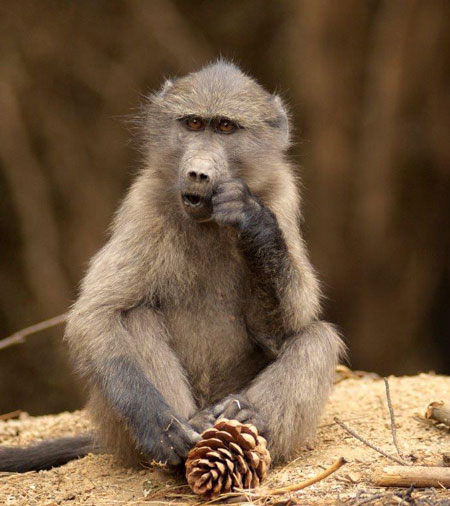 The Constantia troop sleeps higher up the mountain in a valley of the thick gums and pines. The rangers attempted to herd the baboons away from the fire using paintball guns and bear bangers with some success. They were guided by rangers using paint ball guns onto a nearby vineyard. In a natural situation, the baboons would have had the option of moving down onto lower lying ground, but in many cases these routes are cut off by urban development. The farmers have temporarily been sharing their vineyards with the homeless baboons but are expected to reactivate the electric fences.

The Zwaanswyk troop went to roost in trees further down the mountain within their normal territory where the fire did not reach.

Five baboons needed to be treated after the fire. Three were caught and later euthanised and the other two died from their injuries before the rangers could capture them. Preferring not to intervene, baboons with milder injuries have been left with their troops to self heal and appear to be making a good recovery. 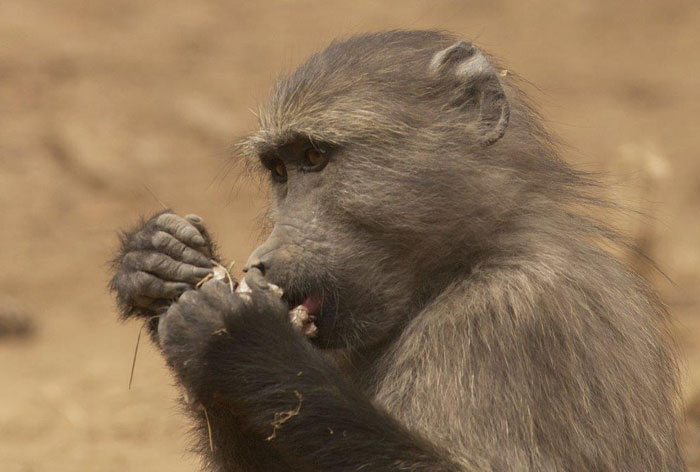 The baboons troops’s behaviour has returned to normal as they are now feasting on dispersed seeds and new shoots, especially the burnt pine cones. The young baboons are playing once again. 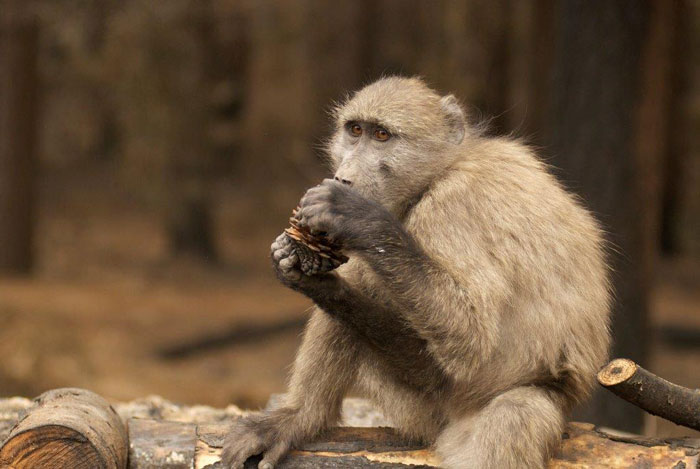 The Baboon Technical Team (BTT) has reinstated normal baboon management that was lifted during the fire. In a statement released by the BTT, the protocol which deals with keeping baboons out of the suburbs was lifted as it was thought the baboons would be forced into the suburbs by the fire. 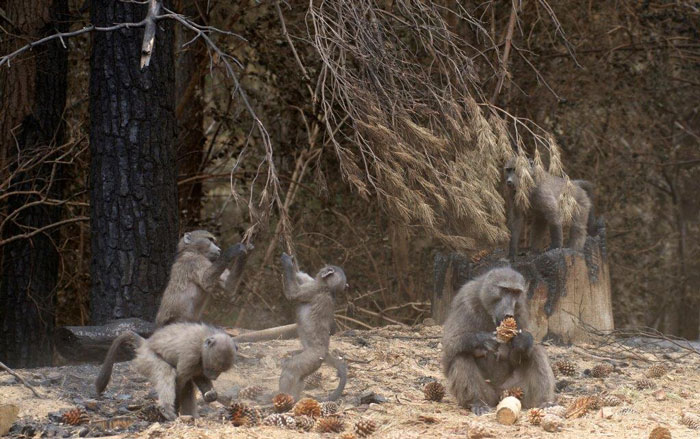 According to Julia Wood the fire has made for easy forging and currently the baboons are feeding on protea and pine seeds. Soon new plant growth and bulbs will provide another food source. However their habitat and food sources has changed and thus the baboons might move to find new territories. 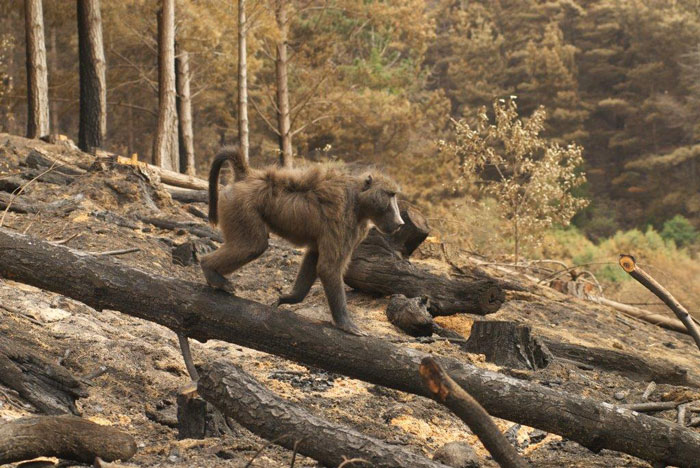 The Human Wildlife Solutions (HWS) rangers are contracted by the City of Cape Town to manage the 10 baboon troops outside of Cape Point Nature Reserve, 365 days of the year from dawn until dusk in an effort to keep the baboons in the fynbos and off the streets.

Residents are being asked not feed the baboons as they have largely given up their raiding antics and the baboon rangers do not want to encourage this type of behaviour. Should you seen a baboon in a residential area please contact: